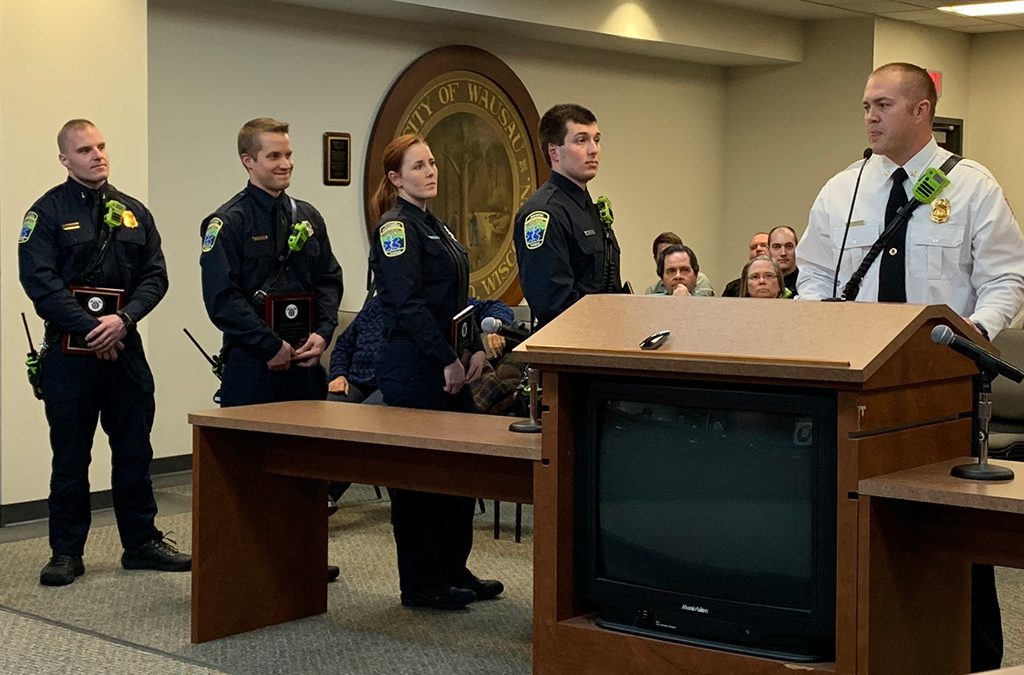 This evening’s meeting started off by recognizing four individuals from the Wausau Fire Department with an Award of Valor. Our public safety workers do courageous things every day but on the October 3, 2019 four firefighters went above and beyond the call. During an active shooter situation Lieutenant Quinn Ambrosius, Ashley Eggers, Matthew Brockman, and Austin Kramer  responded in a very dangerous area to render aid to a shooting victim. At this time the shooter was still at large and the four put their own safety on the line to save a victim that according to battalion chief Craig Kruzen “was minutes away from passing.” Their quick actions, training, and equipment saved a life on that otherwise terrible day.

On that high note other news of note from the meeting are as follows:

The Westside Battery building, located on the corner of 1st Ave and Stewart, was purchased by the city about four years ago with the intention of it being a ‘gateway’ to the downtown and River District. the first RFP received for redevelopment was by Clint Schultz of Urban Street Bistro. Despite having a good plan, Schultz was unable to secure financing and get his project off the ground. After about a year or so of struggling, Schultz withdrew his plans and the city once again solicited requests for proposals for the property. I should point out that other than the time spent working with Schultz to develop his plan, no money was spent on the Urban Street Bistro project.

Enter Jaime Kroening & Lee Martino of Sixth Street Filling Station. They submitted a proposal to renovate the building and open their popular restaurant in the new location, naming it the Dam Place. The West Side Battery building is located in a TID so as part of the proposal the city will transfer the property to the Dam Place at the cost of $1. No other loans or developer incentives are planned.  The city paid close to $389,000 for the building and adjoining property so this transfer is pretty significant. But if it wasn’t for the transfer, this development wouldn’t happen.

I think there are a couple of advantages to this current plan over the previous one. First off the Dam Place is not seeking an SBA Loan. Small Business Administration loans can be challenging to procure and Schultz’s inability to get SBA financing ultimately doomed his project. Second, the proposers have a proven track record and an established brick and mortar business. By leveraging their experience with the Sixth Street Filling Station‚ they have the ability to procure local financing for their new venture.

While it is debatable what the rate of return will be to the city for this project‚ the city’s investment will ultimately long term benefits of increasing the value of the building by renovating it into a useable state and putting the property back on the tax rolls.

The stalled Riverlife project was restarted by Viegut, Ohde, and Riveron last year. In November they poured the foundations for the phase 1 apartments and currently have the first level of the building constructed. The developers were given an option on phase 2 if they submitted plans by December 31, 2019. Phase 2 of Riverlife will consist of a three story building with condos and underground parking. This building is located south of the Phase 1 development or next to the Eye Clinic of Wisconsin. The condos all will overlook the Wisconsin River and will have an estimated sale price of $180,00 – $260,000. From the renderings, this appears to be a very nice looking building and will add more variety to the downtown real estate market. A combination of rental units in phase 1 and condos in phase 2 will create a vibrant mix of short and longer term housing near the river area. As for the financial details, the city will transfer the land to the developers for $1 and will provide up to $485,000 in a reverse TID fashion for foundations, remediation, and infrastructure. In order to receive the reverse TID the developer will have to meet certain development milestones.

Of note in this project is the addition of a small amphitheatre. The developers will build the amphitheatre and the parks and rec department will ultimately run and maintain it. This venue is intended for local artists and smaller acts to be able to provide a more intimate or impromptu performances that would otherwise be hard to do on a bigger stage like on the 400 block. The goal is to provide a more permanent performance space like is currently being offered on the temporary stage on Kickbusch Plaza behind the library.

Approved termination of a contract with Devnet for Assessment Software

This is a not a happy story and I’m not very pleased on how these events transpired. But I believe that recounting what happened here will help us do better.

The assessment department is a critical function of the city hall. While most people would just rather not pay property taxes, they are necessary and the council feels that we are good stewards in putting those funds to use. The assessment department works hard to be fair and equitable in their assessments so a functioning assessment software system is critical to their day to day operation. But first a little backstory.

The assessment department is using a computer application that dates back to the 1980’s. This may sound bad but actually it works quite well and has served the department’s needs for decades. But there are a couple issues that make its future uncertain. First off the company that developed the system was purchased and the new owners ended support in 2013. That’s manageable as the application is stable and the department and CCIT are proficient in keeping it running. The second is that it is running on a cloud based mainframe system. This mainframe system is shared with the county, and we share the costs of the system with the county. But its days are numbered as the cloud system is not Windows 10 compatible so as the county moves its applications off that system, the cost of running the cloud server will be born on the city at a cost of $25,000 a year.

In 2014 the city selected VTSG to develop a replacement assessment system. After 2 years of development the company could not deliver a working product and the contract was terminated by the city at a cost of $80,000. This was a very hard lesson to learn and in 2017 the city entered into another contract for assessment software from Devnet. The city was assured that Devnet could convert the complex set of historical data the city has and that they would be able to deliver a product that was compatible with the State of Wisconsin’s manual of assessment calculations. They were able to mostly convert the data but could not deliver an accurate assessment calculation. Two years later we are in the same boat and the city council voted to terminate the contract without cause. The city at this point had invested $31,000 into the non-working system.

So why is it so difficult to deliver a working system? and why did it take two years to find out that the system would not work? There are a variety of factors in play here. First is that the assessment department has a very rich data set of over 15,000 parcels in their database. Along with that list, each parcel has numerous subrecords that track historical information. If we so choose, we could abandon that historical information and take a more cookie cutter approach to assessment. But that also would limit the department’s ability to generate an equitable tax assessment.

Second, tax assessment software is a highly specialized product. There are countless formulas that go into making an assessment. The Wisconsin Department of Revenue issues a manual for tax assessment but it is up to the application to implement that information in a fair manner. The Devnet system was unable to adequately perform the calculations necessary and the assessment department consistently caught errors in the calculations. In fact‚ of the three municipalities in Wisconsin using the Devnet system‚ two others in addition to Wausau‚ are abandoning them.

Third, tax assessment is a living process. The department has deadlines and can’t afford developer delays. If development isn’t complete when the tax roll book has to go out, the assessment department is forced to use the old system causing a delay in the whole process. Hence why it took two years to get to this point of failure. Issuing the tax roll book in the old system essentially bought the developer time so they could drag their heels in fixing errors. Plus the data set would need to be reconverted again with the latest tax year updates.

So how are we moving forward? While terminating the contract is painful as the city has now lost that investment into a non working system; it does allow the department to search for a new partner to develop a working system. Lessons learned in this debacle will do two things: the assessment department will state upfront to any potential developer what the needs of the city are and what their data looks like. The city will also take a skeptical eye to any developer that potentially over-promises on their ability to handle the data and calculations.

If the old system works, why don’t we just stay with that? This is a valid solution for the short term, but with no support and no compatibility with Windows 10, staying with the existing assessment software is not a solution. The city is only an operating system upgrade away from the whole thing breaking with no developer able to fix it.

It’s a costly mistake and I hate to see our tax dollars spent in this way. Analyzing the situation‚ I’m in agreement with Assessment‚ CCIT‚ and the City Attorney that terminating the contract now without cause is the most cost effective solution. I have no confidence that Devnet will produce a working product. This is a mess that our current assessor inherited‚ and he and the CCIT department did their best to make the situation work; but sometimes you have to cut your losses and move ahead. I also wasn’t on the council when the original contracts were issued and I’ll keep the taxpayers updated on this situation and work to make sure we don’t run into a costly mistake like this again.